“Counter-Jihad” is a movement that treats Muslims as anathema to Western societies, as a people who are involved in violent practices under the command of their religion, and their immigration to the West implies the poisoning of the latter (Lowles 2). There is a deliberate focus on the hardline radical Islamists and their acts, whilst totally ignoring that the largest section of Muslims do not endorse such extremist views, and rather want to enjoy a peaceful life (Lowles 1). Hence, in order to spread their extreme views against Islam, Counter Jihadists do not hesitate to make generalizations and be partial at the expense of the big part of the population which is opposed to such atrocities (Lowles 1). Recent example of the Anders Breivik case on July 2011 proves how the press rushed out to make assumptions about the unknown - until the moment the article was published - identity of the attacker. In one of the first editorials of the Wall Street Journal, the issue was approached from a ‘war-on-terror’ rhetoric scope (Kundnani 1). The columnist described Norway as a victim of Muslim terrorism, and the issue as an attack against the democratic values, which govern Western culture (Kundnani 1). The ease with which the writer was led to incorrect conclusions is built upon a general way of thinking, which makes a clear distinction between ‘us’ and ‘them’; between the opposers and the agents of terrorism (Kundnani 1). This kind of narrative contradicts the liberal values of Western society with the religiously-motivated values within the context of Islam, and calls for a radical transformation of the whole Muslim population (Kundadni 1, 8).

Permeated in different cultures worldwide, online networks span geographical boundaries to allow engagement between users outside of physical constraints. Within the web, social media websites, such as Facebook, have an important role in developing virtual interactions and discussions about a variety of topics. For our research project, we deal with the way in which religious radicals and anti-Muslim organizations manifest their polemical issues online, through pages and groups created in the social network. We begin with a number of questions: What kinds of posts (statuses, links, photos) are most popular and receive the most user engagement? What are the sources for the content? Can we find an overarching trend among the issues being discussed? In the following sections, we outline how we first create lists of these offline groups and their corresponding online social networks; organize the content into categories and codes; and report implications in the content analysis of an anti-Muslim Facebook group.

We built our research upon expert lists created by resources like the Southern Poverty Law Center and HOPE not Hate. The work of these groups had been compiled in the Wikipedia page of Souther Poverty Law Center, so we could easily cross-list this to Facebook to find their online network presence. We then made a list of these Facebook groups and pages and the quantity of their engagement in the form of likes and members. We came to a list of 36 pages, and decided to use the page Stop the Islamization of the World as our case study since it was the most active global community of an anti-Muslim page on Facebook, with 18,916 “likes” when the project started in 15 January 2013. After selecting the page, we analyzed its data and “engagement,” such as posts, likes, and comments, by using the NetVizz Facebook app to create an excel spreadsheet that made data rows of each post. We could then easily see what type of post (link, post, or picture) was most reacted upon. Finding the pictures that were the most liked and commented on, we then used a form of content analysis to analyze these images. We first came up with a list of top 99 most popular images in the page (originating 25% of the reactions), since its first post in July 2010. Then, in order to perform an in-depth content analysis, we selected the top 31 most popular images, corresponding to 20% of the total percentage of sharing, commenting, and likes. We described them according to the message conveyed, respective sources, and users' discussions. Page overview: Stop Islamization of the World, (January 18, 2013) It only has posts made by administrator and page owners. It has: Analyzing all types of content and engagement on this page, we could see that links correspond to 3/4 of all content posted in the page, and more than half of the reactions are expressed by users in "likes".

After gathering all information on the page, we could verify that on a temporal analysis, the total number of posts on the page has been decreasing, but the amount of posts creating a higher level of engagement has been increasing. This result can be seen in this graphic. In addition, we made another graphic which shows that users engage the most with images. Out of top 100 “most engaged with” posts (# likes, comments, shares), 99 are images. In order to verify how the anti-Islamic narrative is constructed in the page, we described 31 most popular engaged pictures. Moreover, we used Google Images to verify the source of those images, or where they also have been reproduced. In this research, we could see that most of the pictures are montages, decontextualized and presents a lack of sources and credibility. On example is the most "liked" picture, with a quote from American actor Bill Cosby. One year before this post, he affirmed that this was a spam, an denied the quote on his official page. Another example is the most commented photo, a polemic "crucified cat", which was popularized online after the riots caused by the movie "The Innocence of Muslims". However, a Danish blog found out that this action is not neither related with the movie or the religion. By verifying the exchangeable file format of the image, the discovered that the picture was taken by an iPhone, in Angola, November 10, 2010. It is also interesting to point out that the most engaging photo on the page (which proportionally has received an higher overall number of likes, comments and shares) has some interesting attributes. The photo is a meme, a montage with an ironic and "comic" bias. It shows how the page works as a cathartic space rather than a discussion space. In addition, the photos work as a spark and are designed to pursue an explicit interpretation. The most common type of content: more than ¾ of the content posted is a link The most common type of engagement: more than half of the reactions are expressed in the form of a "Like" 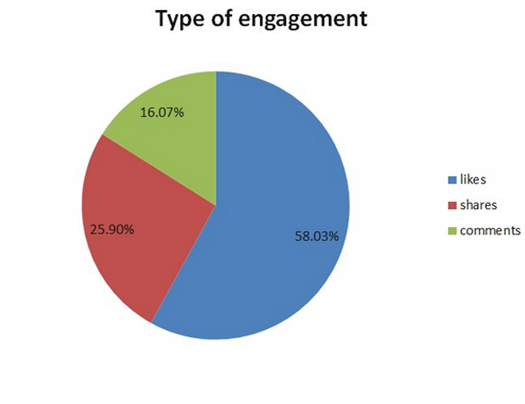 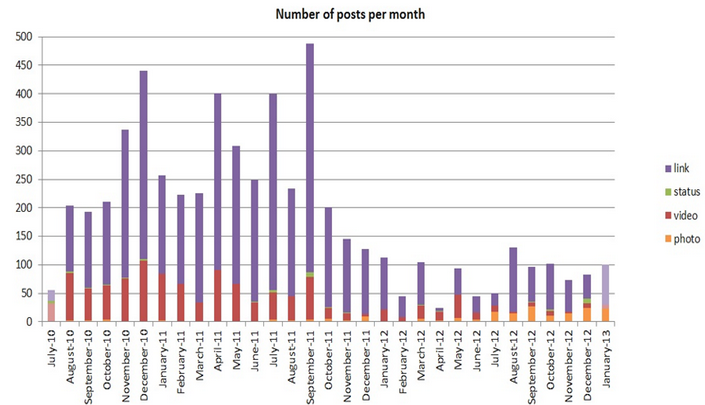 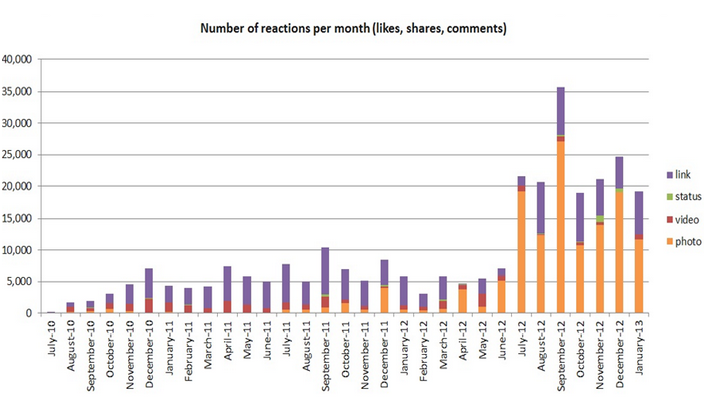 The most predominant characteristics according to the message conveyed

The most often issue depicted on the images 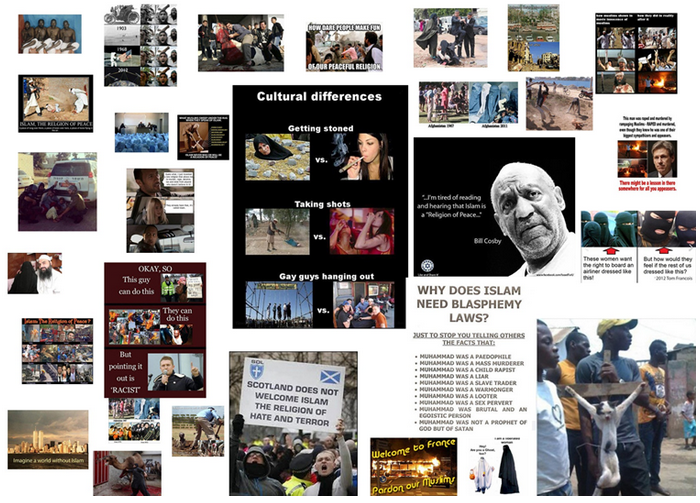 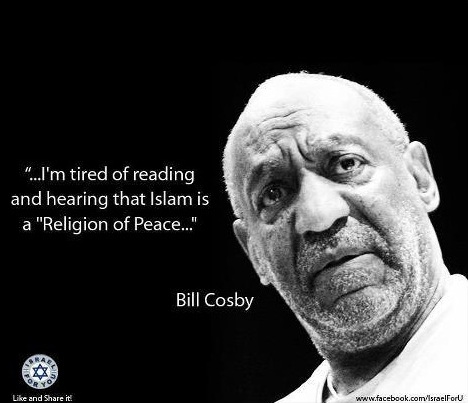 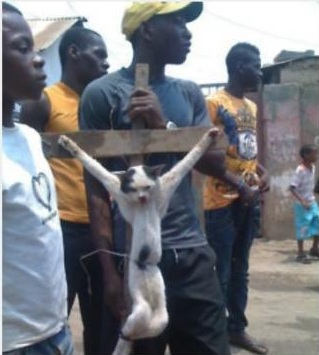 Most "engaged with" image overall 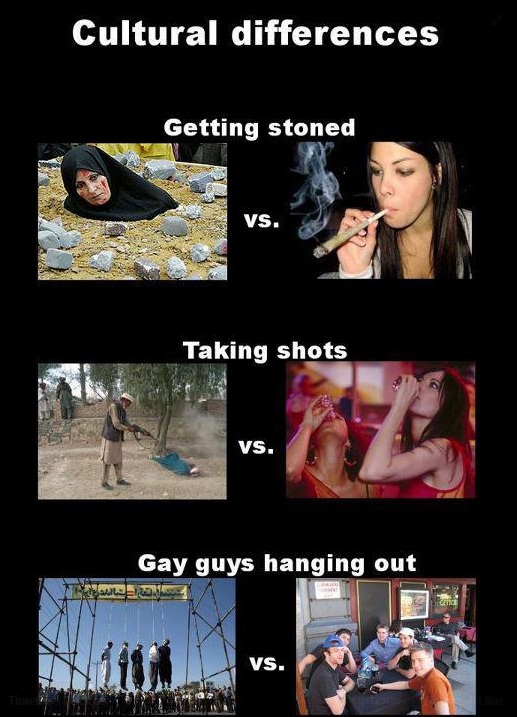 In the ‘Statement of Rights and Responsibilities’, Facebook sets a number of commitments on the part of users, as a way of fighting against digital hate (Citron and Norton 1484). In one of these, the users are requested in a straightforward way to not post content that: ‘is hate speech, threatening, or pornographic; incites violence; or contains nudity or graphic or gratuitous violence.’ And continuing, it mentions that users ‘should not use Facebook to do anything unlawful, misleading, malicious, or discriminatory’ (Facebook 2012). In the Facebook page of our case study, the administrator(s) state(s) at the ‘company’s overview’ section that ‘This site is not to incite religious hatred. It is solely to raise awareness about increased islamization of the world and to defend freedom of expression for all people’ (SIOW Facebook page 2012).However, this claim throughout our research was put into question. According to our classification, the pictures provide a rather biased picture of Islam. The characteristics attributed to Islam could be described, briefly, with words such as: terrorism, regressive, cruel, violent, or non-peaceful. Most of the times, the sources from where the images are extracted are missing or the images have been processed in a way that distorts the truth; a representative example is the image of Bill Cosby which displays a statement he never made. Others depict real acts of violence which, nevertheless, are not related to Muslims or Islam. Having a look at some of the users’ comments – as feasible as it was in terms of our study - we saw that the pictures trigger counter-speech, which is though limited to a labeling of Muslims rather than a fruitful dialogue between the users. Throughout our research we managed to locate some characteristics of hate speech, as defined by William Warner and Julia Hirschberg (20). The use of the terms Islam or Muslims is unnecessarily invoked in many of the image composites. In this way, together with the systematic labeling of their religion, we could see how hateful language was conveyed (20). Also, the lack of sources together with the anonymity of the administrator(s) reinforce this argument (20). Our speculation was focused on how polemical issues are discussed online through pages and groups by religious radicals. Throughout our study we focused on the kinds of posts (statuses, links, photos) that are most popular and receive the most user engagement on one of the most active anti-Muslim communities on Facebook, that of "Stop Islamization of the World". Taking into consideration our findings, we were led to some serious conclusions. A high level of user engagement is channeled through re-contextualized images, lacking of sources. Most of the images lead to a guided interpretation, due to the fact that they have been edited or they display additional text, leaving no space for further interpretations. Lastly, the prevalence of shocking photos gives the impression that the page acts as cathartic space rather than a place for discourse. Taking into account that these implications cannot be generalized, we would like to propose some additional questioning for future research: