Wowen on Web and Women on Waves, which are Dutch non-profit organisations concerned with women's human rights with the mission to prevent unwanted pregnancy and unsafe abortions throughout the world are the main cases of this study. Regarding their aims and target audiences, their relation with the WWW and their being on different language and issue spaces draw the general frames of the research. Considering the general view of the issue researched, we have come across different kind of actors on the Web, including the competitors of Women and Web. Therefore, six actors were selected as Women on Web, Women on Waves and four sites that Women on Web listed as a warning for being fake vendors. Within the limits of the research, we decided to cover one of the main target continents for Women on Web which is South America. Brazil, Argentina, Peru, and Bolivia were chosen to represent the whole continent. When designing the query, our approach was to follow the answer to the question; 'How does the Women on Web website define abortion?' From this point of view, the definition was made around the keywords: unwanted pregnancy, unsafe abortion, safe abortion, medical abortion, illegal abortion, abortion rights, and abortion pills.

What is the source distance of Women on Web for the issues ‘abortion pills,’ ‘unwanted pregnancy,’ ‘medical abortion,’ and 'unsafe abortion' in the national web of Brasil, Argentina, Peru, and Bolivia?

For what issues are they related as prominent actors? What is the relation with the competitors (the ones recognized by Women on Web and the new ones taken from the top 5 results of the Google search)? What is the ‘pace’ of the national webs?

1. We took the last query from the header of the Women on Web website listing the ‘types’ of abortion pills. 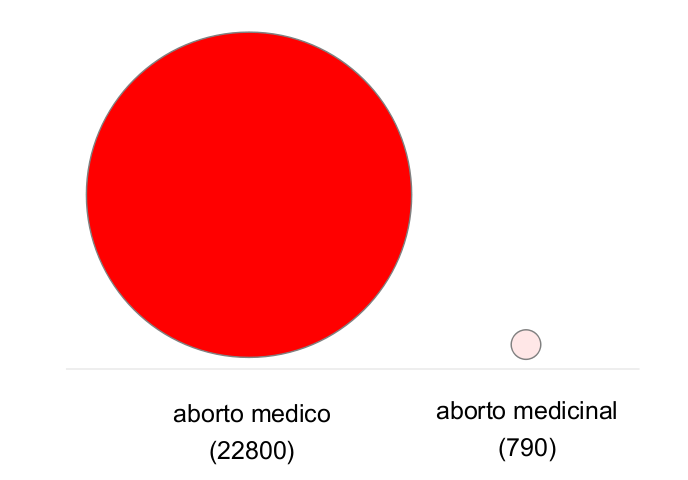 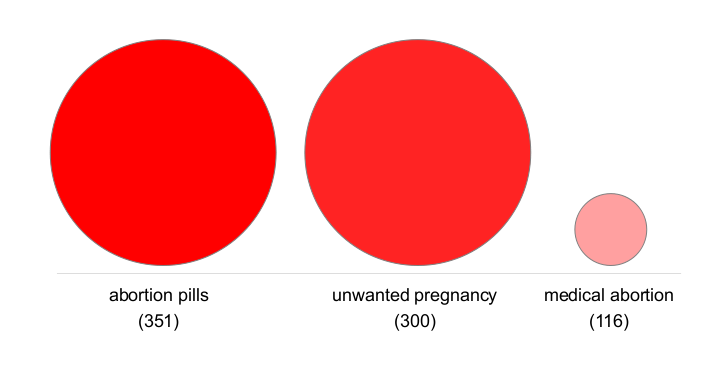 Sources for Issues
The source distance of the Women on Web site follows similar patterns across the national Webs but varies according to the queries. For example, they are ranked as a top result for the query "aborto medicinal" (which has translation problem) and ‘unwanted pregnancy’ not present for "aborto medico"or for "abortion pills" or the name of the pills in the top 10 - 20 results. Attachment - ppt. presentation Looking for competitors
Women on Web activists individuate a kind of competitors they fear, the websites that sell the abortion pill for commercial reasons. In particular, they denunciate the presence of vendors of fake abortion pills, and fake vendors of pills. 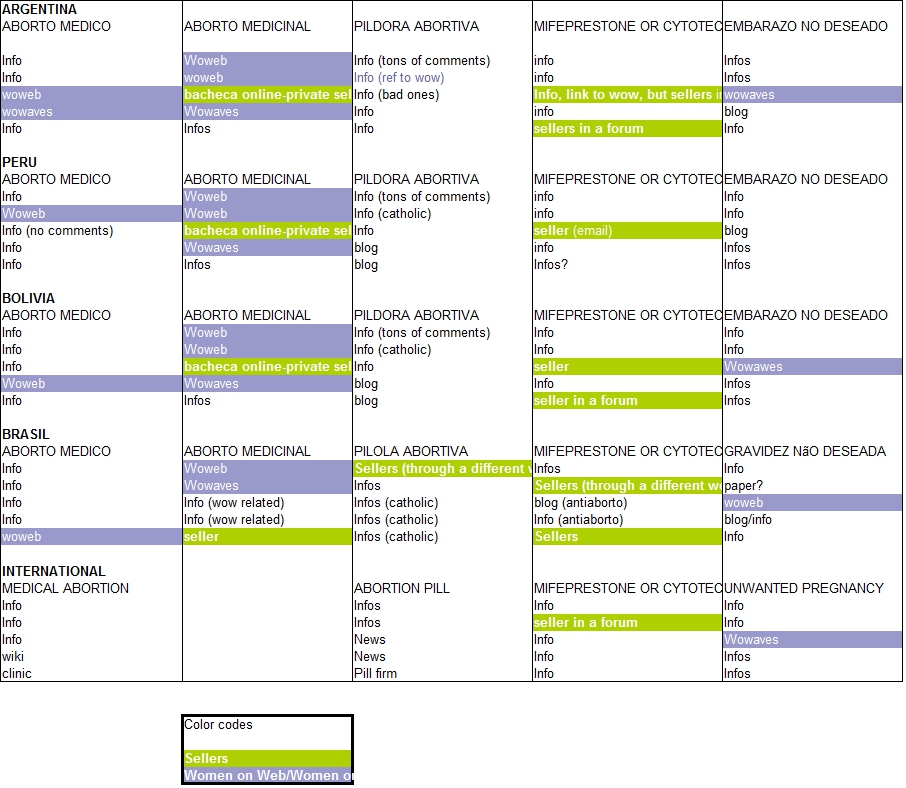 Are these actors prominent as Women of Web esteems? Which is their communication strategy? Can we find a way to individuate similar websites on the Web?

1st step: For each Google query we elaborated, we have done analyses in depth for the top five results to find out answers to the questions: Where are the vendors better positioned? Are they stronger in a particular national context, or in a particular issue? Are they ranked higher or lower than Women on Web and Women on Waves?

Results: While Women on Web and Women on Waves are top ranked for the 'aborto medicinal' and for the unwanted pregnancy issues, the 'names of the pills' issue is an uncontested territory of the vendors. The international version of Google, and the issue 'abortion pill/pilola abortiva/pildora abortiva' seem to be neutral spaces, dedicated to information.

2nd step: We observed more in detail the content of the vendors' websites.

Results: Although they are a small sample, composed by very well ranked vendors, we can individuate very different strategies of communication: posts in online boards, advertisements, independent websites, comments in forums or in general websites. In general, we individuated a strong use of what we can call 'underground communication strategy'.

3rd step: We tried to understand where the websites are based through the WHOIS. Some of them are located in Europe (Cyprus and GB), others are registered in the countries where the abortion is forbidden (Argentina). Since some of the vendors are using external web hosts, or blogs, we were not able to locate all of them correctly.

4th step: We focused only on an example of vendor that seems a fake one, and which is impossible to locate through Whois. Since it is based on a external web host site, we interrogated Google in order find similar websites at the same site. We found 209 similar results, with one of the chemical names of the pills in their URLs.

Countries in South America share similar sources and information patterns (based on 4 queries and their resonance).
They rather share a language Web than having national Webs demarcated by Google (.ar; .bo; .br; .pe)
Both local and global sources are present in the top 5 results across the four national Webs.
National Webs per issues are well up-to-date in terms of years.

Contextualize Women on Web using the issue ‘abortion’ and its global sub-definitions and actors.

Look up in social media for discussions. (Facebook’s pages on abortion in English are not very big/dynamic)
Results in Brazil were listed as a prominent issue space for the query ‘aborto medico’ even though they were listed near the bottom results.

Look up for the prominence of the fake vendors we have discovered.